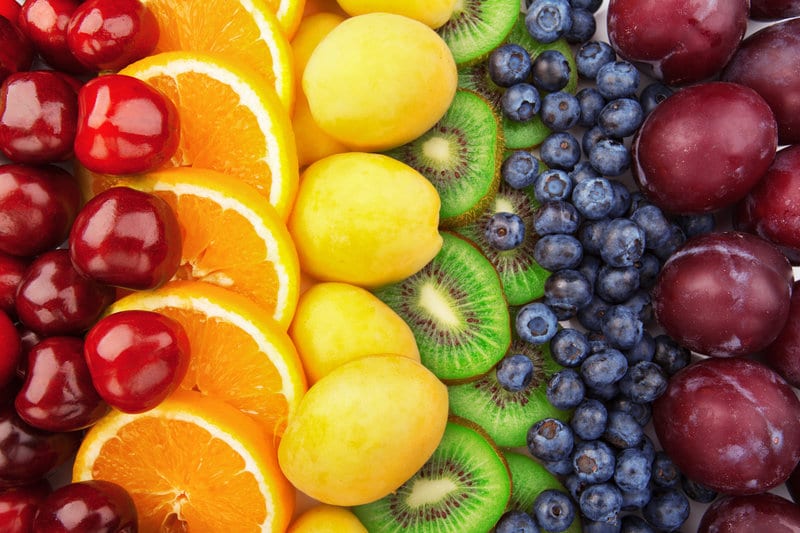 Anxiety can make you turn to a variety of habits in an effort to ease the feeling. Unknowingly, many of these only make the condition worse. One coping behavior is eating.

When anxious, many people will reach for a bag of chips or some other mindless snacking. Eating when you’re anxious isn’t always a bad idea — if you know the right foods to eat. While eating certain foods can help ease symptoms of anxiety, others can escalate them. Unfortunately, there’s not one particular food or diet that can alleviate anxiety. However, research shows that certain eating patterns can lead to an improvement in anxiety symptoms.

So, if like many people, you’ve been dealing with anxiety in these uncertain times, there are many practices that can help you relieve the symptoms, and altering your diet is one of them.

According to the Mayo Clinic, the general anti-anxiety, dietary guidelines which may prove helpful are as follows:

In addition to the general guidelines above, certain foods have the ability to reduce the severity of anxiety symptoms because of their brain-boosting properties. According to one study in the journal Psychosomatic Medicine, adopting a healthy diet is associated with a reduction in symptoms linked to anxiety disorders. The food you eat alters your gut microbiome which influences your mood and mental health pretty quickly.  Science is confirming that what you put in your mouth directly affects what goes on in your head.

Here are seven foods that science proves can offer some relief from anxiety. 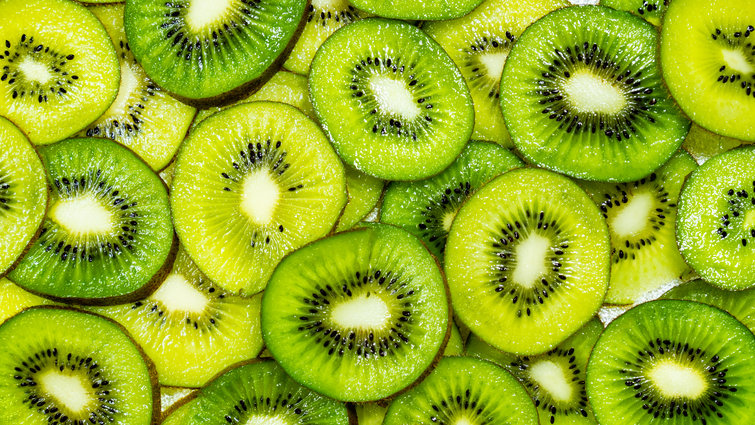 Kiwis are rich in folate, vitamin C, and E. According to research, oxidative stress plays an important role in anxiety. The combination of nutrients in a kiwi aid in the reduction of oxidative stress, which can result in chronic inflammation that science shows plays a part in many mental health conditions. Beyond its strength as an antioxidant, kiwi is also a fruit high in serotonin. Serotonin is a neurotransmitter involved in a broad range of physiologic processes and is strongly linked to your baseline mood.

One study found that eating two kiwi fruit an hour before bedtime significantly improved participants’ sleep onset, duration, and efficiency using both subjective and objective measurements. Participants went from sleeping an average of six hours a night to seven.

Flavonoids are a large group of plant-based antioxidants. Flavonols, one type of flavonoid, are found in chocolate. You won’t find flavonol content listed on the nutrition label. However, the label should have a percentage of cocoa solids. Since flavonols are found only in the solids, you can use the percentage of solids to choose products with the most flavonols. Dark chocolate with higher percentages of cacao solids typically contains less sugar and more healthy fat.

Dark chocolate improves blood flow to the brain and improves memory, learning, and focus according to research. Chocolate is a source of tryptophan, an amino acid precursor to serotonin. In one study, people who ate about an ounce and a half of dark chocolate every day for two weeks showed reduced levels of stress hormones.

The food you eat can either help your anxiety or make symptoms worse.

Fatty fishes, such as salmon, are rich in omega-3 fatty acids. Research has shown omega-3s to help improve anxiety and many other mental health conditions as well as overall brain health. Contrary to popular diets in the past, fat is your brain’s friend. Your brain needs essential fatty acids (EFA) to function properly. Because your body can’t produce them, you have to get EFAs from your diet. 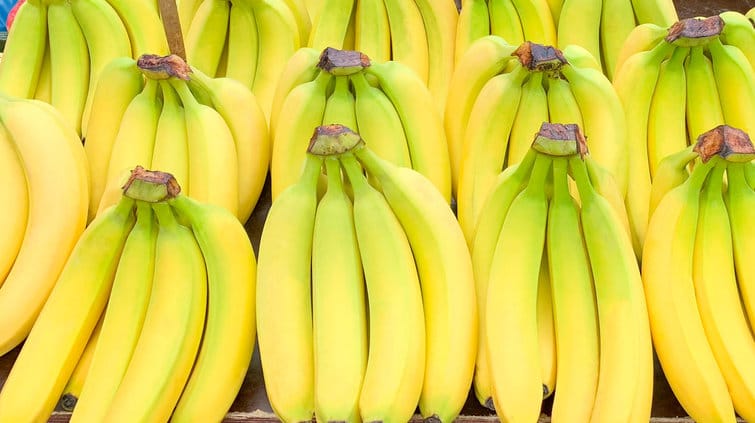 The saying goes “an apple a day keeps the doctor away.” Well, research shows that eating bananas can keep anxiety symptoms at bay. Bananas can reduce anxiety because they’re natural beta-blockers. This means that when you eat a banana, they prevent adrenaline from binding to beta receptors. This slows nerve impulses to the heart and counteracts the effects of adrenaline to keep a lower heart rate and calmer state of mind. Many performers and athletes know this and use bananas to help calm performance anxiety.

Bananas are also a good source of magnesium. Magnesium is an old home remedy for all that ails you, including “anxiety, apathy, depression, headaches, insecurity, irritability, restlessness, talkativeness, and sulkiness.” Science is showing some support for this. Bananas are a great source of potassium, vitamin C, and fiber. Studies show eating bananas help students learn more efficiently and improve exam scores. They also contain vitamin B6, which promotes the production of serotonin, norepinephrine, and dopamine which support mood and cognitive functions.

Throughout history, people have known of the calming properties of chamomile tea As it turns out, research has shown chamomile to be effective in aiding with relaxation, and helping with anxiety, depression, and insomnia. In a small 2016 study,  researchers determined that long-term chamomile use “significantly” reduced moderate-to-severe symptoms of generalized anxiety disorder.

Asparagus is rich in folate. Folate is the naturally occurring form of vitamin B9 found in foods such as asparagus, eggs, and leafy greens. Folic acid is the synthetic form of folate found in most supplements. Both folate and folic acid facilitate the formation of red blood cells, protein metabolism, and cell growth in the body.

Studies have suggested that folate levels are associated with depression and anxiety. Folate is implicated in anxiety in a couple of ways that involve the MTHFR gene. The MTHFR gene provides instructions for making an enzyme called methylenetetrahydrofolate reductase. There is a link between this gene and anxiety. The MTHFR gene allows your body to turn folate from your food into methylfolate. Methylfolate is essential in the brain for making neurotransmitters, including serotonin, dopamine, and norepinephrine, and DNA.

MTHFR gene variants have been linked to many health issues, including depression, anxiety, bipolar, leukemia, miscarriages, and more. 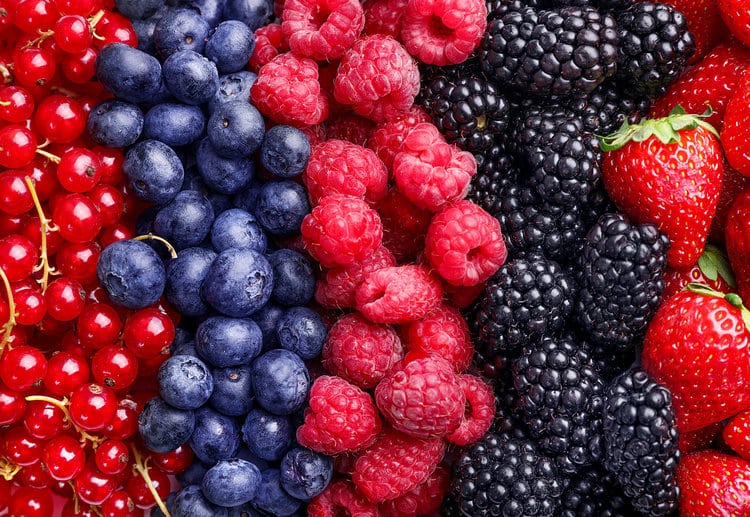 Berries are rich in vitamin C which is an essential nutrient for the brain. Vitamin C helps you cope with cortisol, a hormone that is released during times of stress. When you are stressed and anxious, your body’s requirement of vitamin C increases. Eating berries and other foods high in vitamin C aids in supplying and replenishing levels during anxiety.

Berries are also chocked full of antioxidants which also help protect your cells from stress and inflammation. Anxiety is thought to be correlated with a lowered total antioxidant state. Enhancing your diet with foods rich in antioxidants may help ease the symptoms of anxiety.

Berries are also rich in natural sugar that can satisfy the need for sugar, as fuel for your brain and as a craving,  that people often have during anxiety and stressful situations. One study showed that one serving of blueberries improved people’s moods within two hours of consumption.

Anxiety is an all too common condition these days. Various lifestyle and mental health practices, such as exercise, mindfulness, meditation, grounding, thought reframing, and more, are proving to be helpful. Science has also shown that food can affect anxiety, both negatively and positively. You can choose certain foods that have ingredients that support and nourish your brain and trigger the release of neurotransmitters to promote calmness and well-being. 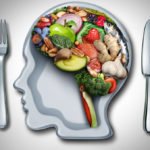 How to Cut Your Alzheimer’s Risk in Half 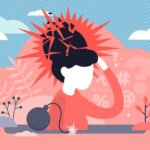 What You Think Is Depression May Really Be Trauma Defenses