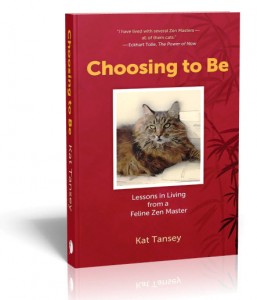 In Choosing to Be: Lessons in Living from a Feline Zen Master, Kat Tansey details her healing journey from depression through learning meditation while under the tutelage of her Buddha Master cat, Poohbear.  Combining two of my favorite things: mindfulness and cats, the book is really an easy-to-follow meditation guide disguised as light, entertaining reading.

Tansey takes us through her frustrations and triumphs as she spends time on the cushion crying, feeling angry, squirming, and falling asleep and overcomes each one to reach new levels of insight and peace.  persisting with her meditation practice despite hardships and distractions, Tansey observes:

Similarly, I recovered from depression and a brain injury, resulting from a pill popping suicide attempt, using meditation, among many other tools.  In the blog, The Myth and Magic Of Meditation, I wrote:  “Meditation is the closest thing to a happy pill that I have found.”

The life-changing abilities of meditation that Tansey and I experienced firsthand are being confirmed by science.  On a physical level, a person is learning to alter the way their brain functions by changing their thought patterns. Through neuroplasticity, the ability of the brain to change its structure and function through repeated thought and activity, meditation and mindfulness strengthen connections and expand circuits in the brain that are frequently used while weakening and shrinking those areas rarely engaged permanently changing how the brain functions.

Brain scans of people who practice meditation show increased activity in the frontal lobes, the rational brain, and reduced activity in the amygdala, the fear center of the brain.  According to Frontiers in Human Neuroscience:  “meditation training may induce learning that is not stimulus – or task-specific, but process specific, and thereby may result in enduring changes in mental function.”  In studies, just eight weeks of training in meditation quiets the amygdala to response provoking stimuli in people even when in a non-meditative state.

Neuroscientists have discovered that meditation can stimulate significant increases in activity in regions of the left prefrontal cortex—an area of the brain associated with positive emotions while decreasing activity in parts of the brain related to negative emotions. A mindfulness practice can grow the hippocampus, an area of the brain responsible for learning and memory, which is being connected to lower depression scores.  Areas of the brain associated with empathy and compassion seem to grow with a meditation practice.

The benefits of meditation and mindfulness are not limited to the brain. Meditation has been proven to strengthen the immune system, reduce blood pressure and the risk of stroke, minimize pain sensitivity, and enhance cognitive function. Research is showing that mindfulness practices cause lasting changes in the brain similar to those caused by exercise or learning a musical instrument.

It is now known that a healthy emotional style and mental habits can be intentionally cultivated and learned like any other cognitive skill through mindfulness and other mental health practices.  Meditation is being called “botox for the brain.” Giving your brain a work out with meditation, just like you would work out any other muscle, has been found to prevent the normal shrinkage of the brain that happens with age related decline and prevents cellular aging.

If you already meditate, good for you. Keep it up.  If you don’t, start today!  It will change your life.  It did mine. 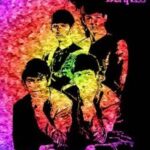