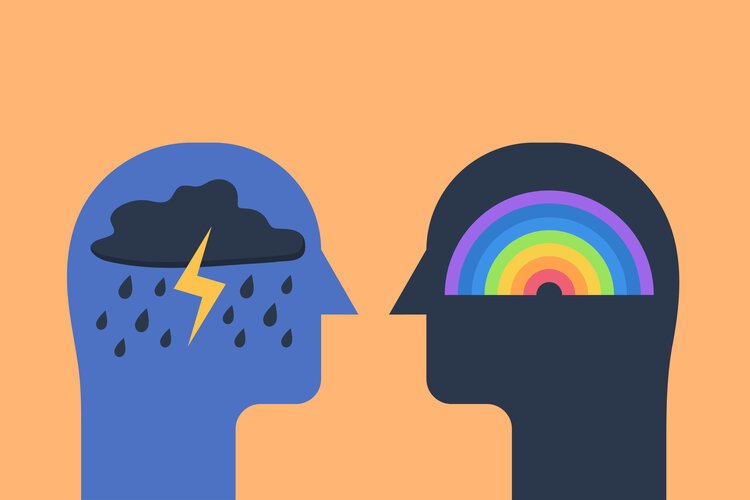 Mental health in America was declining long before COVID-19 hit. A year later, it’s at an alarming low.

The U.S. Centers for Disease Control and Prevention reported in August of 2020 that symptoms of anxiety had tripled and depression symptoms had quadrupled among a group of 5,470 adults as compared with a similar sample from 2019. According to the 2021 State of Mental Health in America Report,  19 percent (47.1 million) of people in the U.S. are living with a mental health condition nationwide. That is a 1.5 million increase over last year’s report!

A study published by the American Psychological Association further confirms the dire state of mental health. According to a survey conducted by the Harris Poll in February 2021, one in five adults reported that their mental health had worsened over the previous year. Parents of young children, essential workers, young people, low-income populations, and people of color have been hit especially hard. The pandemic may have hurt children the most.

As you may know all too well first hand, the pandemic increased anxiety, stress, grief, trauma, loneliness, and isolation and took away many people’s activities and systems that supported their mental health, both emotionally and financially.

The State of Mental Health in America

The 2021 State of Mental Health in America Report confirms the trend that mental health in the U.S. has continued to get worse and that society is ill-prepared to handle the ensuing mental health crisis. Specifically, the report tells us:

The Pandemic May Have Physically Changed Your Brain

After more than a year of stress and uncertainty — which is experiencing trauma for many, you may actually have a different brain. The article “Has a year of living with Covid-19 rewired our brains?” tells us this:

The impact is experienced throughout the body, she says [Aoife O’Donovan, an associate professor of psychiatry at the UCSF Weill Institute for Neurosciences in California, who specialises in trauma], because when people perceive a threat, abstract or actual, they activate a biological stress response. Cortisol mobilises glucose. The immune system is triggered, increasing levels of inflammation. This affects the function of the brain, making people more sensitive to threats and less sensitive to rewards.

In practice, this means that your immune system may be activated simply by hearing someone next to you cough, or by the sight of all those face masks and the proliferation of a colour that surely Pantone should rename “surgical blue”, or by a stranger walking towards you, or even, as O’Donovan found, seeing a friend’s cleaner in the background of a Zoom call, maskless. And because, O’Donovan points out, government regulations are by necessity broad and changeable, ‘as individuals we have to make lots of choices. This is uncertainty on a really intense scale.’”

What are we aiming for post-pandemic? What does mentally healthy even look like?  It doesn’t mean the absence of stress and happiness all the time. Even a healthy mind is going to experience times of mental distress, such as anxiety, frustration, anger, restlessness, unhappiness, grief, and resentment. These are all part of the “normal” emotional spectrum of life. As long as these conditions don’t become chronic or disabling, the person can still be mentally healthy. The prolonged, ongoing stress of the pandemic pushed many people into the chronic category.

Mental health is largely about resilience. Resilience is the process of adapting in the face of adversity, trauma, tragedy, threats, or stress. Essentially, it’s “bouncing back” from life’s difficulties. Being resilient doesn’t mean that you don’t experience hard times. In fact, intense emotional pain, extreme trauma, and severe adversity are common in people who are considered resilient. The road to resilience most often involves considerable hardship. That’s how people become resilient, oftentimes. It’s a skill their brains develop. A resilient brain even has physical differences.

Is There Such a Thing as a “New Normal”?

So, here we are facing change and uncertainty again as the pandemic winds down in the U.S. Even though it’s a “good thing”, it can bring a lot of anxiety and stress with it. Many of us are returning to hurried lives putting in long hours at offices, shuttling kids to and from schools and activities, and making time for that exercise class or social commitment again — which is both good and bad. In some ways, the pandemic showed us a slower, simpler kind of life. We were forced to spend more time at home, with family and pets, and oftentimes outside. It wasn’t all bad.

The governor in my state announced that masks are not required indoors for fully vaccinated people anymore. I was in a food market the other day and felt very unsure about taking mine off. Surprisingly, I was more concerned with doing what was “right” — what everyone else was doing — than contracting the virus. Some people had their masks on. Some people had bare faces. I kept putting mine on and pulling it off. It is strange that while initially wearing a mask felt weird, it now felt weird to be without it. (Although I have to say that I love not wearing the thing and having it continually fog my glasses.)

In time, it will feel perfectly normal without it, and all of our brains will adapt to a “new normal”.

Ways You Can Help Your Mental Health Post-Pandemic

As explained above, we all have literally been through a traumatic experience. Many of us have lost loved ones and jobs. Most of us have had comforting routines and wellness practices abruptly taken away. Some of us have put on weight and are still not sleeping well. Since most of us are having to switch up our routines again anyway, it’s a good time to build some beneficial mental health activities into the new normal. Here are some changes and practices you may want to consider incorporating into your life.

Because many of us were forced to eat at home and prepare our own meals, some people’s diets improved during the pandemic. Because having food delivered became so easy, some people’s diets may have gotten worse.  Science has confirmed that what you eat directly impacts your mental health – both good and bad. For example, depression has been linked to fast food. Diet is such an important component of mental health that it has inspired an entire field of medicine called nutritional psychiatry. You can definitely affect your mental health with the food you eat.

Research shows regular exercise can decrease and completely eliminate some depressive symptoms for some individuals. Exercise benefits your brain in many ways and actually changes your brain’s chemistry. Exercising calms the brain’s fight-or-flight response and increases neuroplasticity, and neurogenesis. Exercise also relaxes the resting tension in your muscles which breaks the stress feedback loop to your brain. Your brain figures if your body isn’t stressed, it doesn’t need to be either.

Sleep is closely connected to mental and emotional health and science has proven links to depression, anxiety, bipolar disorder, and other conditions. The relationship between sleep and mental health is complex. While sleep problems have long been known to be a consequence of many psychiatric conditions, research suggests that sleep also plays a causal role in both the development and maintenance of mental health issues. 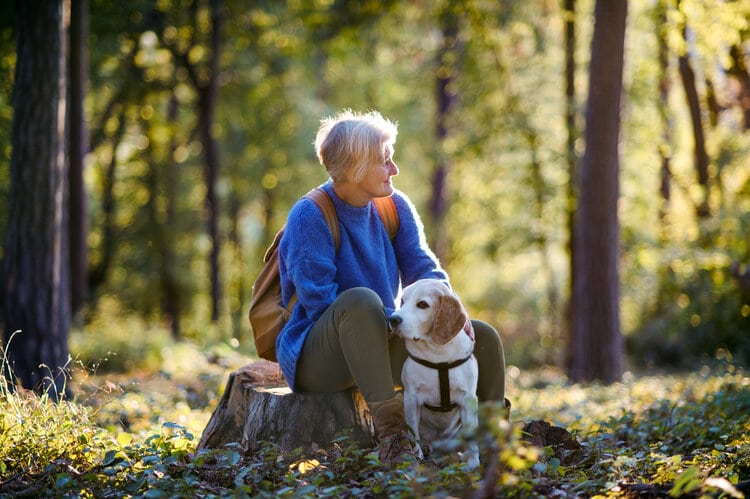 Your brain needs vitamin N (nature).  Research is showing what many have known all along, that communing with nature can improve your memory, focus, and attention. You don’t need much of the green stuff either. Studies found that walking 50 minutes in nature boosted people’s moods as well as their working memories and attention. A 90-minute walk produced changes that helped protect their brains from depression.

Mindfulness is simply a way of thinking. At the most basic level, it’s being aware of what’s happening as it’s happening. Being mindful means that you become aware of the workings of your mind, at that moment. When practicing mindfulness, you deliberately direct your awareness back into the now. You can change your life and habits by practicing mindful moments throughout your day. Science shows mindfulness reduces stress, anxiety, and improves many other health conditions.

Meditation doesn’t have to be difficult. Perhaps the most popular form of meditation, mindfulness meditation, is a great place to start. Or you can begin to practice with just a few minutes each morning or take one-minute meditation breaks throughout your day.

Visualization, also called creative imagery, harnesses the mind-body connection and allows you to direct it to your benefit. In your brain, imagining an act, feeling, or situation and experiencing it are not that different. Just as your mind’s reactions to stress can impair immunity and promote illness, visualization has been shown to stimulate the immune system to fight disease. Research has validated that visualization influences actual physical changes in your brain and body. You can learn more about how to visualize here. 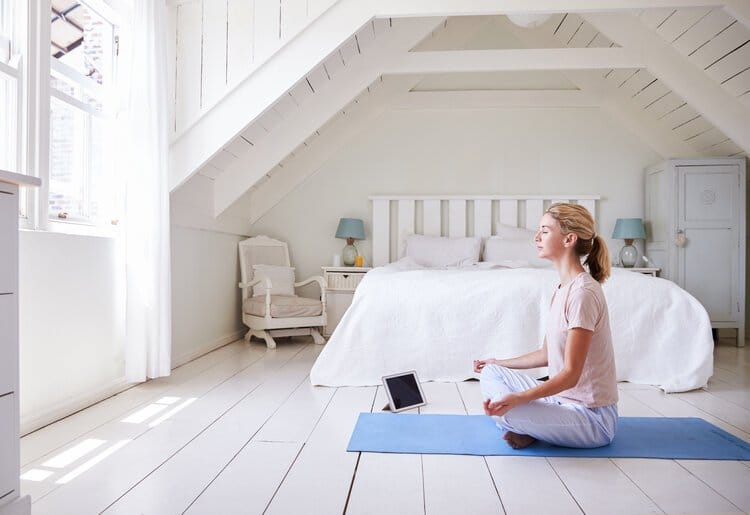 Yoga has been shown to have many health benefits. One Harvard study reported that yoga modulates the stress response. The poses, breathing exercises, and meditation techniques in yoga can reduce the impact of stress. The self-soothing practices included in yoga can lessen anxiety and even physical pain. Science has proven that yoga also eases depression and has other neuroprotective benefits.

A number of studies have shown that slow, diaphragmatic breathing triggers the body’s relaxation response instantly. Slow breathing is the fastest way to calm your brain and body. Science found that neurons at the base of the brain stem have a direct connection to the brain’s arousal center. They can either set off the body’s alarm or keep it calm. When you intentionally slow your breathing, these neurons tell your nervous system to calm down. Here are Six Breathing Techniques That Calm Your Brain and Body Instantly. 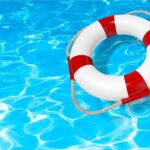 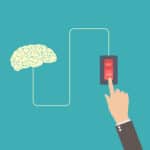